The Chuni and the Arc Line

Guru Hargobind Singh ji is the Sixth Guru. The sixth body of consciousness is the arc line Body. MSS Nirvair Singh writes in “The Ten Light Bodies of Consciousness” that “the arc line is your halo. It’s actually depicted in old paintings of saints. You don’t have to be a saint to have one. Everybody has one. It is a band of energy that runs across the top of the head from ear to ear in both men and women. Women have an extra arc line that moves across the chest from nipple to nipple as well. The arc line can be a thick as an inch and a half, very strong, silvery, and lustrous, or it can be pencil-thin, quite dull, and broken. If it’s broken in too many places, you can’t stay alive. That’s it. You can’t live with too many breaks in the arc line.” As someone who habitually wears a flowing chuni, MSS Hari Dharam Kaur was asked to write about her experiences of how the flowing chuni strengthens her arc line and gives grace to her daily life.

The Technology of Bana

Our world today is teeming with rules and regulations. Airports exemplify this with extensive security protocols, checking the same passengers and their luggage several times. Anyone who appears “suspicious” is often targeted and searched. In the Spring of 2011, I arrived in Argentina after an exhausting flight. When reclaiming my luggage, I assumed I would be required to have an extra search, due to my appearance. However, the airport security official waved me to the exit saying, “Oh no, Señora, you go this way. Welcome to Argentina!” He appeared at ease, seemingly taking for granted that I was someone who could be trusted. The white flowing garments conveyed a sense of comfort to him and others around me.

This white clothing  I wore is “bana,” the graceful dress originating in India and introduced to many of us in the West through the Siri Singh Sahib. When I travel or go out in public on most occasions, my bana also includes a flowing chuni. The flowing chuni covers the crown of a woman’s turban and is uniquely for women. It is a tool to expand a woman’s aura, cover her arc line over her heart, and offer a protective veil of grace over her being. The Siri Singh Sahib spoke of the chuni as the flag of our nation and as karmee avai kapra nadree mokh duaar, or the divine clothing brought by good karma that leads to the door of liberation. A woman, he said, can only wear a chuni if she is comfortable with her own grace.

This is what the chuni is to me—a cover of grace. I enjoy the way it looks and feels. My chuni covering my arc line gives me a subtle blessing, bringing me a feeling of royalty, comfort and security. My chuni connects me to Guru Gobind Singh. He teaches us to be niaaraa, to exclusively identify ourselves as Sikhs of the Guru, and this brings the Guru to always stand with us. The chuni is like the divine flow of a sound current, which makes me feel in every cell that I belong to the Guru and the Guru personally belongs to me. When wrapped in my angelic chuni, I feel surrounded by the Guru’s light.

Wearing a chuni also helps me find the virtues within, to recognize that God within me is compassionate, wise and truly kindhearted. The chuni shows that the enlightenment I long for is already with me, as I merge in the divine flow of life. Although dressing with a chuni may not be for all occasions, it is a beautiful addition to include when going out into town. Wearing bana with a flowing chuni is a “seva”; it represents the truth and grace of the Guru and inspires all who see it to know that there is goodness in the world. Like the sacred flowing waters of the Golden Temple’s sarovar, the chuni embodies life, prayers and grace. 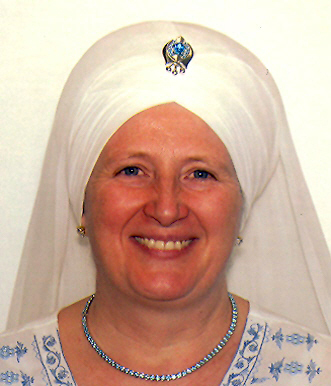