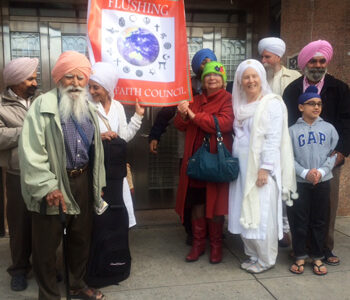 New York is a culturally diverse place colored with an amazing collection of very alive cultural centers and religious communities. My husband and I live in Park Slope, Brooklyn, where it is an odd church that has not been converted to a condominium or health club. However, in Queens, NY, you can drive through the neighborhood and feel the presence of a vast colorful diversity of religious centers and spiritual groups that serve the Queens community that have maintained their cultural values.

On Sunday, October 18, 2015, SS Siri Vishnu and I were invited to share in the Flushing 7th Annual Unity Interfaith Walk. The theme was Unity—and unified we were. Our Khalsa brother, Harprit Singhji from the Parson’s St. Gurdwara, took us to the Walk after performing Kirtan where we were to offer the closing Ardas. The Unity walk started at the Free Synogogue, walking onward to the Morman Church of the Latter Day Saints. We then proceeded another block to the Sikh Center of New York (Parsons Gurdwara) then another block to the Macedonian African Methodist Episcopal and ending at Saint George’s Church.

During the program, we acknowledged the killing of faithful worshippers at the AME Church in Charleston South Carolina, with prayers that efforts at community solidarity might help prevent such tragedies and build bridges of love and understanding. I was grateful to participate in this Unity Walk. I relish the farsightedness of this community that celebrates unity in diversity. May we be inspired by their organization and strive to do the same. 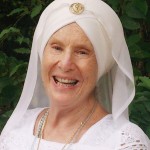