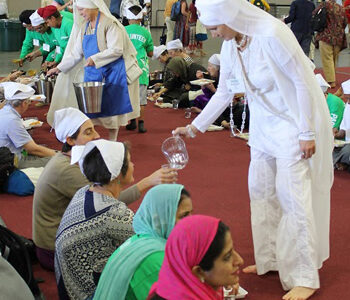 Gratitude and joy were constant and faithful companions during my recent visit to the 2015 Parliament of World Religions that took place in Salt Lake City, Utah, from October 15 – 19. The gratitude and joy that filled me was for the remembered blessing of being able to call myself a Sikh of the Guru;  that as a Sikh, I was from a dharma—a way of life—where serving food to people (which the Sikhs did every day of this parliament) was as natural as breathing.  I felt grateful that the truth of that resonated deep within the core of my being; “Serving langar is what Sikhs do.  It’s just what we do.”

I had been told numerous times that the Sikhs and langar were the main attraction at the 2009 Parliament of World Religions in Barcelona, Spain.  At that venue, langar was prepared on-site, under the auspices of the Nishkam Centre from Birmingham, UK.  When it was perceived that there was a greater need than anticipated, Bhai Sahib Mohinder Singh declared that langar would be served three times a day instead of just once, making it by far the most memorable experience for all the attendees of the Parliament that year.

This year, with the Parliament being held so close to Los Angeles (and to commemorate our 25th wedding anniversary), my husband Siri Shiva Singh and I attended with the express purpose of partaking in serving langar. We served side by side with the tireless and devoted Nishkam Sikhs of the UK under the loving guidance and inspiration of Bhai Sahib (as he is reverentially referred to by his followers).

There was tremendous joy in helping to serve langar to 7,000 plus people, some of whom had never before had the experience of being served a plate of hot and delicious food absolutely free of charge.  One amazed recipient said to me with wonder in his eyes, “You don’t just give us a plate of food. You keep serving and serving. I’ve never seen anything like it!” What we received through serving was more than we could have possibly anticipated.

The Blessing of Langar

My husband and I had certainly been blessed to see the miracle of the Golden Temple and its daily langar to 100,000 people, but we had never before witnessed langar being served to that many people who had no prior knowledge or experience of it.  Seeing and experiencing langar through those new eyes gave me a renewed and much deeper appreciation and relationship with the whole concept of langar. Bending over to spoon out rice and daal onto waiting plates was a familiar feeling. Seeing faces light up with wonder, awe and gratitude was indeed a great privilege and an honor.

We were also blessed to be recruited to the “Welcoming Station,” where we provided head coverings for guests and gave them a crash course in the meaning of langar, explaining why we remove our shoes and sit on the floor where all are equal before God; where all are as one, where no one is higher or lower; where we cover our egos by covering our heads to show respect and reverence to the Giver and to the food that has been blessed.

People received the words and the vibration behind them with understanding and acceptance.  I saw one person refuse to put on a headcover. He was about to leave, not agreeing with the concept as it was explained to him, but then he changed his mind and reluctantly placed it on his head.  I took note of the little dance he had done with his ego to come to that acceptance of this tradition.

The spirit of langar permeated the Parliament, opening doors of connection and sharing, and leading to appreciation and fellowship that pervaded every encounter I had during those four uplifting days. Hearts were open and joyful for Sikhs and non-Sikhs alike.  Langar was like the glue that bound together the many extraordinary events, exhibits, forums and presentations of the Parliament Of World Religions, serving as a microcosm of the way the world will be when we learn to understand and appreciate our differences and celebrate and cherish our similarities in all religions as well as in all aspects of life. 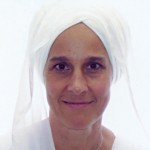